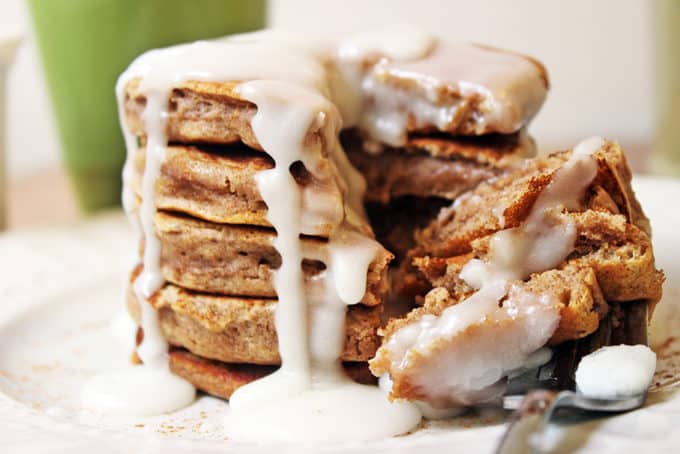 These Cinnamon Roll Pancakes with Icing are all about enjoying the flavors of a delicious warm cinnamon roll and your morning cup of coffee while reveling in the joy that you were able to make this delicious breakfast in less than a half an hour on a weekend or even a weekday morning and feeling like you won breakfast. They are so easy I actually made them this week, on a weekday no less for my friend who was watching the kids while I went to register for a photography class. You may have seen the picture on my Instagram feed. 😉

Don’t get me wrong, I LOVE actual full fledged cinnamon rolls, and one day I will make my favorite ones for you that are from Flour Bakery’s cookbook. It is a labor of love and boy are they amazingly delicious. The thing with cinnamon rolls (made from scratch) is that the dough goes through a number of resting stages and in order to have them baked fresh in the morning you either have to wake up SUPER early, or be content with eating them later in the morning than you would be able to enjoy these pancakes. Currently we are the parents of two kids under 3, so any extra hours of sleep are not only appreciated, but necessary to be able to have the energy to hold my head upright. Don’t feel bad for us, we still get to enjoy these! And we aren’t settling too much! I make these pancakes probably once a month with delicious crispy bacon and serve them with a bowl of fresh fruit. I also make a delicious Cinnamon Roll Coffee Cake that takes about as long as these pancakes, can you tell we are big cinnamon roll fans in this house?

Combine the flour, sugar, salt, baking powder and cinnamon in a bowl. Whisk together until light and airy. In a second bowl, whisk eggs, milk, maple syrup, melted butter and vanilla extract. Add in the dry ingredients and whisk until just combined. Heat a lightly buttered griddle over medium low heat. Using a 1/4 cup ice cream scoop, cook pancakes 2-3 minutes on each side. Boy do these pancakes need some delicious icing! 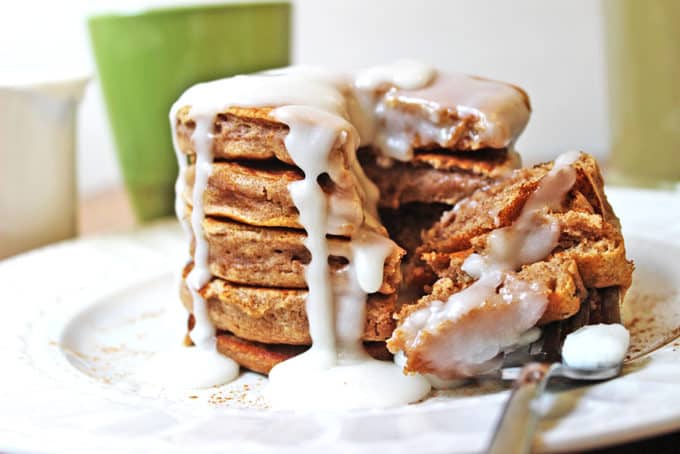 Want to cut down on your time in the kitchen even more? Make the batter the night before and keep it in the fridge, covered. Then the next morning when you wake up take it out of the fridge. Once you are fully awake the batter will be ready to go!