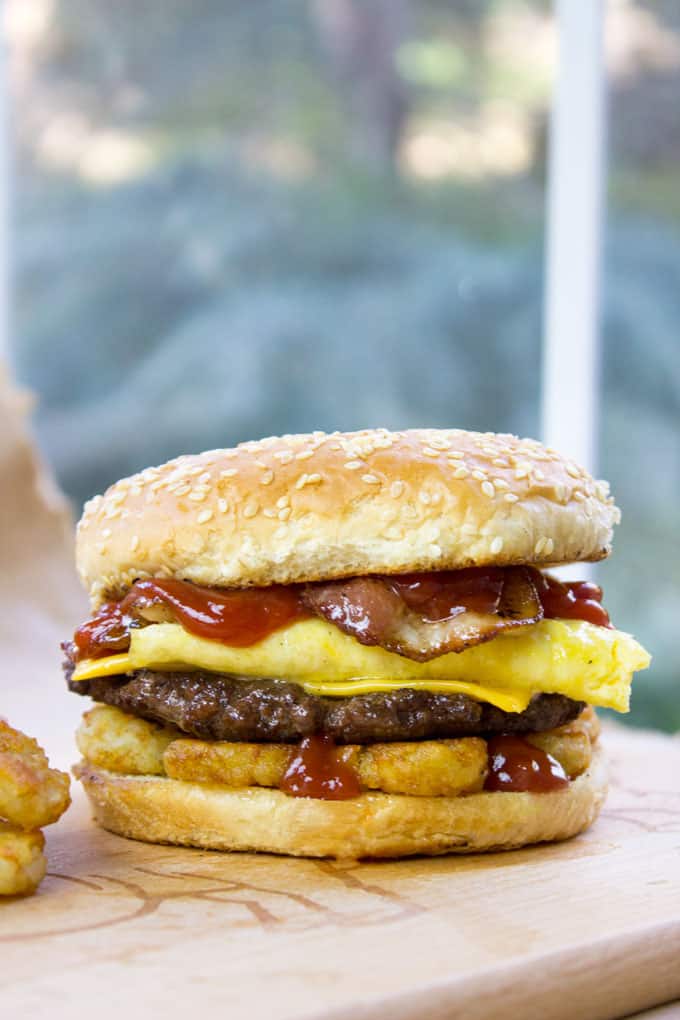 The Carl’s Jr. Breakfast Burger is a standout amongst all the other fast food breakfast options in both size and in flavor. I’ve always been a huge fan of breakfast for dinner and this burger accomplishes exactly that.

The burger is pretty popular at Carl’s Jr. on the West Coast and while it isn’t as popular as my In n Out Double Double Cheeseburger, this burger is definitely worthy of your breakfast table this weekend. Since you’re making the burger at home you’ll be using just a handful of ingredients instead of a list full and you’ll actually end up with a burger that looks like the ad instead of a burger that looks like it was sat on. For the beef in the Carl’s Jr. Breakfast Burger I stuck with a simple beef + salt and pepper recipe but let’s be honest… this is where my burger starts to pull away. The quality of your beef is going to be higher than that of a fast food restaurant and your patty is going to probably be thicker. You can, of course, make the patties as thin as you would like, but the slightly thicker patty makes a great, juicy burger.

We top the beef with American cheese and a folded sheet of scrambled eggs. Yes, I know what you are thinking, “no egg over easy? No runny yolk?!” No, no runny yolk because the original called for scrambled eggs. I personally remade this burger (and will share it soon) with all homemade, fresh ingredients and my own version of this burger definitely featured a runny egg yolk. For this burger the best information I can give you is to cook the egg in a pancake form without moving it much on low heat. Don’t brown the eggs, just cook until they set, then cut it and fold it in half to put it onto your piece of cheese.

Finally the bacon, ohhh the bacon. I went with thick cut bacon because I am a bit selfish and I LOVE thick cut bacon. It has a slight chew to it instead of just cracking when you bite into it and the flavor of the bacon is much more pronounced. Top with ketchup and your top bun and you’re set to enjoy the best breakfast burger you’ve ever had… any time of day. 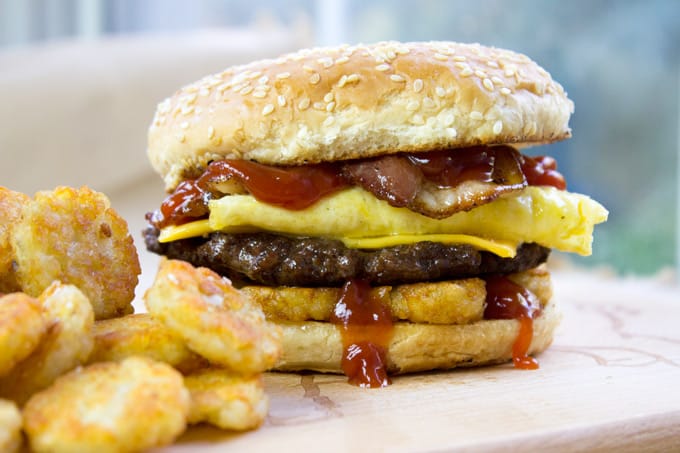