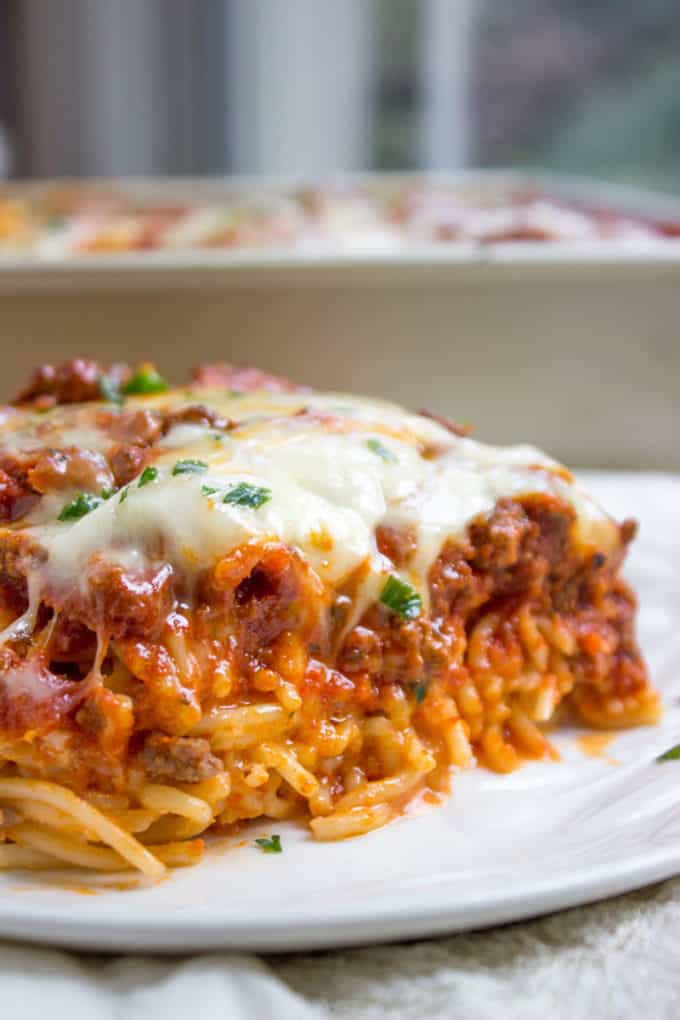 Baked Million Dollar Spaghetti is a hit in our house every time we make it and it isn’t hard to see why. With melted cheese, cream cheese, meat and homemade marinara sauce, and perfect as a make ahead meal you can freeze, this dish is a perfect meal in a pan and even better served with a nice side salad.

It may seem like there is a lot of meat and cheese going on in this 9×13 pan, but we frequently get 12 portions out of the meal, 9 if we’ve got a lot of hungry people to serve. The flavors are rich enough that a smaller portion is enough to satisfy. If you’re looking for alternative flavor ideas to the classic meat sauce here are some fun options we’ve gone with in the past: I frequently make this Baked Million Dollar Spaghetti in a double quantity so I can have one tray to serve and one to freeze. For making ahead the only difference in the directions would be to follow all the steps until it says to put it in the oven. At that point, top with foil and freeze. To serve I highly recommend you remove from the freezer the day before you plan on serving so it can defrost in the fridge. If you don’t remember to remove it, you can expect your cook time to be about an hour long at least.  But look at the beautiful tray of Baked Million Dollar Spaghetti you’ll be left with: I usually let the Baked Million Dollar Spaghetti cool for about 5-10 minutes when it comes out of the oven. I find it is easier to cut into perfect squares using my favorite silicone spatula and in our house everyone is obsessed with the shape of it. I tried serving with tongs once and you would’ve thought I’d committed a crime. Can’t blame them though, it does look pretty cool cut neatly.