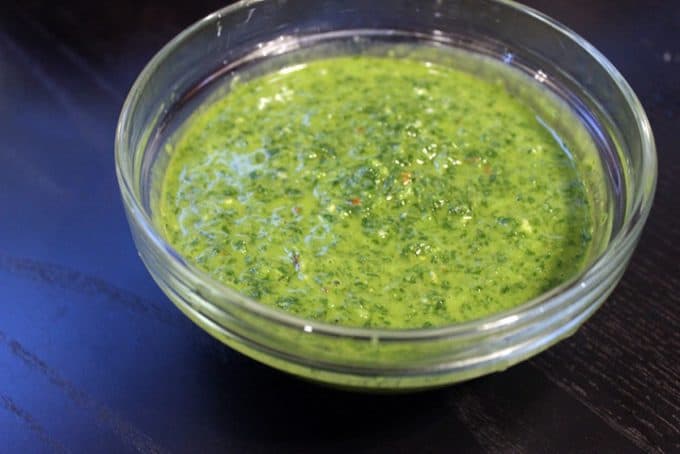 Considered to be the ketchup of Argentina, chimichurri sauce is a versatile topping on meats and potatoes. It also doubles as a delicious dipping sauce. Beginning to end it is a 2 minute dish and the payoff is so delicious it will make even simple grilled meats taste special.

When I was pregnant with our youngest I was on a roller coaster ride the entire 10 months. The first half of my pregnancy I was as sick as one could feel, on two different medications for my morning sickness. Right around the 20 week mark, I could move again without feeling sick and I was so excited to be feeling better, I went out and saw friends, took our oldest to playdates and starting reading food blogs again. Sitting in my doctor’s office waiting for my last pregnancy appointment and I was flipping through Better Homes and Gardens. The mental list I had about all the things I wanted to eat had grown quite long and even though I did not think I could add anything else to the list I came across this recipe: Recently I was thinking about chimichurri sauce and I remembered I had taken this picture. It took quite a while to wade through the thousands of photos I had taken since then [hey I had a new baby, so I was taking pictures every 30 seconds], and a mere hour later I found it. Five minutes after I found it, I had a bowl of this sauce. I’ve since dipped crusty bread in it, eaten steak, chicken, roasted potatoes, and even eggs with it. The herb flavor is so bright and fresh, it could work well with almost any other food. A second batch is chilling in my refrigerator tonight because we went through this first batch in just a few days.

The recipe is so simple, there aren’t even any great action photos of how to make it. I literally just threw all the ingredients in my mini food processor and in 15 seconds I was done. 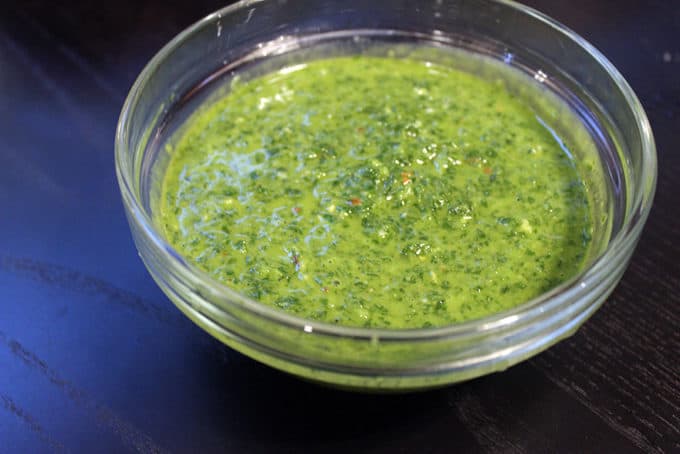 Considered to be the ketchup of Argentina, chimichurri sauce is a versatile topping on meats and potatoes. It also doubles as a delicious dipping sauce. Beginning to end it is a 2 minute dish and the payoff is so delicious it will make even simple grilled meats taste special.
Course Sauce
Cuisine International
Keyword Argentinian Chimichurri, chimichurri
Prep Time 5 minutes
Cook Time 0 minutes
Total Time 5 minutes
Servings 8 servings
Calories 126 kcal
Author Sabrina Snyder

Enjoy! Trust me, you will.